VLADIMIR ISACHENKOV 13 minutes ago PoliticsVladimir
MOSCOW (AP) — National Security Agency leaker Edward Snowden wants asylum in Russia and is willing to stop sharing information as a trade-off for such a deal, according to a lawmaker who was among a dozen activists and officials to meet with him Friday at the Moscow airport where he has been marooned for weeks.

Human Rights Watch provided a photo of Snowden at the meeting, the first new image to appear of the former NSA systems analyst since the Guardian newspaper broke the story of widespread U.S. Internet surveillance based on his leaks.

Whether Russia would be willing to take Snowden up on his request is unclear. The Kremlin has signaled that it wants Snowden out. But granting asylum would be a diplomatically risky move, threatening to worsen Moscow-Washington already strained by U.S. criticism of President Vladimir Putin’s crackdown on the country’s opposition and Putin’s allegation that the U.S. is meddling in Russian affairs.

But it would allow Putin to portray Russia as a principled defender of human rights and openness, despite the fact that it allows its security agencies to monitor the Internet. 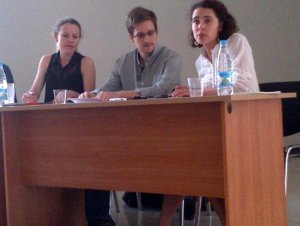 Dmitry Peskov, Putin’s spokesman, told Russian news agencies after the announcement that Russia has not yet received a new bid for asylum and that Putin would continue with his insistence that Snowden stop leaking information.

Both Nikonov and Genri Reznik, a lawyer who participated in the meeting, said Snowden was willing to stop leaks.

“He said he was informed of this condition and that he can easily accept it. He does not intend to damage the United States’ interests given that he is a patriot of his country,” Nikonov said. However, it is unclear whether Snowden still is holding onto potentially sensitive information about U.S. intelligence operations.

Snowden is believed to have been stuck in the transit zone since June 23, when he arrived on a flight from Hong Kong, where he had gone before his revelations were made public. He had been expected to transfer in Moscow to a Cuba-bound flight, but did not get on the plane.

A brief video of the meeting’s opening shown on the Russian news site Life News showed Snowden speaking, then being interrupted by a flight announcement on the airport’s public-address system

“I’ve heard that a lot in the past weeks,” Snowden said, smiling ironically.

Snowden made an initial bid for Russian asylum, but Putin said he would have to agree to stop leaking before asylum would be considered. Snowden then withdrew his bid.

Venezuela, Bolivia and Nicaragua recently have offered him asylum, but it is unclear if he could fly to any of those countries from Moscow without passing through airspace of the United States or its allies. Some European countries allegedly refused to allow Bolivian President Evo Morales to fly through their airspace on his way home from Moscow last week because of suspicions that Snowden was on his plane.

In a text of his opening statement at the meeting released by the anti-secrecy group WikiLeaks, Snowden said he wanted to accept all asylum offers and travel to the countries that have made them “to extend my personal thanks to their people and leaders.”

He also denounced the United States for what he said was pressuring its allies to block him from their airspace. Snowden could be hoping that Washington would not risk trying to block a flight he was on if he had Russian asylum. 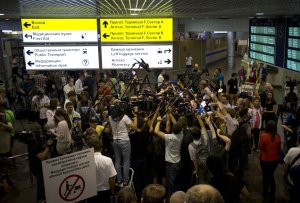 Journalists gather around Genri Reznik, a prominent lawyer and head of the Moscow bar association, a …

In the short term, he could also be seeking Russian asylum simply as a way of being able to get out of the airport and move freely.

How long a decision would take is unclear. Anatoly Kucherena, a member of a Kremlin advisory body who was at the meeting, said the process could take two to three weeks. But Putin’s imprimatur could accelerate the process, as it did when French actor Gerard Depardieu was granted Russian citizenship in a matter of a few days.

They came after an email in Snowden’s name was sent on Thursday. On Facebook, Lokshina posted the text of the email, which says in part that Snowden wants to make “a brief statement and discussion regarding the next steps forward in my situation.”

Hundreds of journalists flocked to the airport, but were kept in a hallway outside the meeting area which was behind a gray door marked “staff only.” It was not clear if Snowden would have to come out that door or if he could exit by another route. 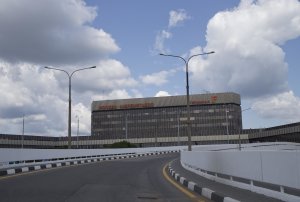 A view of Sheremetyevo airport outside Moscow, Russia, Friday, July 12, 2013. A Russian official of  …

Russia has said it cannot extradite him because by remaining in the transit zone he is technically outside Russian territory.

Although the meeting left Snowden’s fate still uncertain, it at least confirmed where he was; speculation had swirled that he had been spirited out of the country.

“We found for ourselves that he is real, he’s no phantom,” said Kuchurena.

Jim Heintz in Moscow contributed to this report.